By late March of my freshman year, I was wholly undecided about my major. I had taken classes in a wide range of departments including geoscience, math, comparative literature, and philosophy. I had not taken a single Classics course. But I still decided–and succeeded–in applying for funding from the Classics department and gaining exposure to a new ancient language last summer. 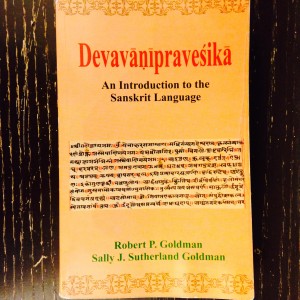 Before I applied for Classics funding, I felt unprepared about my summer plans. I had taken two “mandatory” class trips during my fall and spring break, to Cyprus and Greece respectively, so I was used to the thrill of university-sponsored travel. I had assumed that I would spend my summer abroad and counted on attending a global seminar. After being rejected from my choice global seminar, however, I dreaded speaking to people about my nonexistent plans. I doubted that I had time to find and apply to international summer programs. I reset my sights around my home near New York City and thought about what I really wanted to learn.

I had taken Latin for seven years throughout middle and high school and loved every step of the way. I missed translating ancient prose and poetry and hungered for a new classical language to explore. In particular, after completing a project on Greco-Buddhism in ancient Gandhara, I wanted to learn Sanskrit or ancient Greek to further my understanding of relationships between language and culture in the ancient world. I found two options: an intensive program in ancient Greek through CUNY and an independent study in Sanskrit with a private tutor based in New York City. After a friend revealed that she had gotten funding from the Classics department to study spoken Latin in Italy during the summer of her freshman year, I applied for departmental funding to use for either of the two options.

I started by creating a proposal to submit to the Classics department through SAFE, the student activities funding engine. I described my two options and delineated the costs that each would incur on me. I wrote a short essay to describe my interest in learning Sanskrit and Ancient Greek. The outcome was encouraging: I received a significant amount of funding from the department. As a result, I was able to take Sanskrit lessons three times a week with a teacher and immerse myself in one-on-one study for the entire summer. I fell in love with the language and what it taught me about my Indian, Hindu-Buddhist upbringing. I have since progressed even further in my language studies and started a petition this year in efforts to bring Sanskrit back to Princeton.

The moral of the story is, especially if you are a freshman/underclassman, don’t hesitate to apply for departmental funding! Browse SAFE for sources of funding, demonstrate interest, and research programs to design a schedule. There is a good chance you will be successful in receiving some aid from Princeton to set yourself up for a fulfilling summer.