During tenth grade, I began working as a research assistant at a Chemical and Biological Engineering lab at Princeton—a project I continued until we published a paper early this year. This lab performed computational research using extremely complicated algorithms. As a tenth grader, I had none of the basic knowledge I needed: no chemistry, biology, or coding. 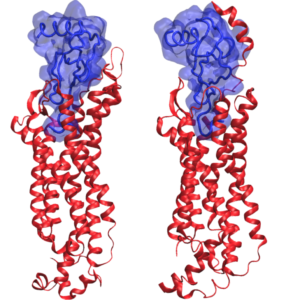 The 3D folding structures I generated for HIV-1 receptor proteins and their ligands–one of the projects I worked on.

On my first day, I walked out of my meeting with the principal investigator (PI) with a foot-tall stack of scientific papers to read. Filled with trepidation, I took a look at the first. The paper could have been written in a foreign language, for all I could understand of it. I was completely out of my depth and unsure how to catch up. The post-doc supervising me must have seen my dismay, because he sat me down and gave me a crash course on everything I needed to know.

While I’ve always spoken Greek at home, I had never used it in the context of scientific research. I could not understand any of the terms he was using. These were words I barely would have recognized in English! Since this post-doc had come directly from Cyprus, I realized I would have to learn the language of science in Greek as well as English—a daunting task.

By the time I returned home that night, I was drained and overwhelmed. Unsure where else to start my learning, I bombarded my parents with questions about the Greek words I had heard. I then tackled the stack of papers, plodding slowly through the first one, sometimes having to look up the meaning of nearly every word in a sentence.

Over the next couple of weeks, I asked hundreds of questions to improve my understanding. This was a slow process, but while the PI and post-doc maintained high expectations of me, they were able to do so without shaming me about my lack of knowledge. They never pushed me to be perfect—only to try my hardest, to understand first 20%, then 50%, and eventually 80% of a scientific paper—and encouraged me to pepper them with questions, no matter the complexity or the language in which they were delivered.

Eventually, I realized that while I still felt just as overwhelmed as I had on my first day, I had made tremendous leaps in my understanding. I now understood the bilingual scientific chatter and was able to contribute. My supervisors, of course, never let up the pressure—the second I completed a task or augmented my understanding of a concept, they moved on to the next challenge. Looking back on it now, it was that mentality that forced me to learn so much without realizing.

This experience proved immensely useful once I started as a Princeton undergraduate. When faced with an overwhelmingly difficult course, I was able to reflect back on my 3-year experience working in that lab. Remembering that I had started from scratch with the same feeling of impending doom, but had managed to make a meaningful contribution to the lab, was extremely encouraging. I was confident that I could do it again, and I was able to apply the same tactics to catch myself up. Without learning how to overcome a huge gap in knowledge in a short time, I would have struggled much more in my first year at Princeton.

While you may feel completely unqualified and out of your depth upon starting a project, I have learned that the best way to catch up is to power through. You may not understand all, or even half, of the material in the beginning, but as you keep exposing yourself to knowledge, you will see your understanding grow faster than you thought it could. The most important thing is to accept that this process will take time and reassure yourself that in the end, you will be much smarter for it.

More on this topic in two weeks!